Created in 1984, the U.S. Preventive Services Task Force is an independent, volunteer panel of national experts in prevention and evidence-based medicine. The Task Force works to improve the health of all Americans by making evidence-based recommendations about clinical preventive services such as screenings, counseling services, and preventive medications. All recommendations are published on the Task Force’s Web site and/or in a peer-reviewed journal.

Each year, the Task Force makes a report to Congress that identifies critical evidence gaps in research related to clinical preventive services and recommends priority areas that deserve further examination.

In October 2020, the U.S. Preventive Services Task Force (USPSTF) published draft recommendations concluding that “the current evidence is insufficient to assess the balance of benefits and harms of screening for hearing loss in older adults.”

HLAA continues to support screening for hearing loss for adults and is disappointed in the conclusions made by the USPSTF. We agree with the American Speech Language Hearing Association’s comments when they say:

The USPSTF Draft Recommendation risks reinforcing the unfortunate reality that many Americans and health care providers mistakenly ignore the initial signs and symptoms of hearing loss as an unavoidable result of aging. Early identification of hearing loss is critical to avoiding additional loss and mitigating the function impairment individuals experience with mild to moderate hearing loss. Many health care providers do not appropriately screen and refer patients for additional evaluation, treatment, and mitigation when appropriate, even when the patients are at elevated risk for hearing loss as a result of heightened occupational or social risk factors

HLAA is concerned that precious time will be wasted for thousands of Americans with hearing loss who do not receive hearing screenings. We agree that more research is needed. We would encourage research in this area.

But we cannot wait. Doctors should be screening for hearing loss today. The quality of life of their patents depend on it. The hearing health of a nation demands it.

The USPSTF is seeking comments to help make its draft documents more useful to primary care providers and others who are interested.

Based on the evidence presented in this draft Recommendation Statement, do you believe that the USPSTF came to the right conclusions?

An opportunity was missed to find more data by the very narrow criteria for selection.  Future evidence reviews should be expanded to include criteria such as adults with conductive hearing loss, congenital hearing loss, sudden hearing loss, noise-induced hearing loss, as well as those who are exhibiting early stage dementia. Symptomatic, but untreated hearing loss, should also be considered.

Do you have other comments on this draft Recommendation Statement?

HLAA supports the conclusion of the evidence review: that more research is needed. We appreciate the clear guidance USPSTF gives regarding the research needed to support hearing screening in asymptomatic adults.

However, HLAA is concerned that eight years after a similar evidence review was conducted, there is still not enough data to support a recommendation for screening for hearing loss. As an organization that works directly with consumers, HLAA hears regularly from people who don’t recognize their hearing loss or who don’t take action until they have such a significant loss that it forces them into an early retirement and/or they have become isolated, having missed out on opportunities to learn about ways to treat or mitigate their loss early on.

HLAA is concerned this report may well serve to lead physicians to conclude that hearing screenings are unnecessary. We are concerned about the untold numbers of people who will delay any attempt to confront a suspected hearing loss because the doctor they trust did not bring it to their attention. Once again, we see this as a missed opportunity to bring health care providers and patients the information they need for early intervention. 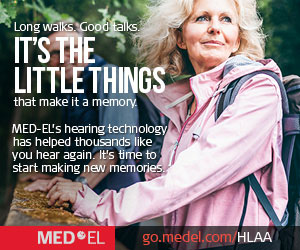