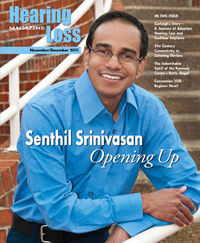 When Senthil decided it was time to open up about his hearing loss, he realized he was not alone.

When Rod and Syndi Lyon adopted their daughter and were there at her birth when she failed the infant screening test, they had no idea what would happen next.

There are many ways to expand the use of your hearing aid or cochlear implant. Have you thought of Bluetooth, for example? The author explores various technologies you can use.

The Indomitable Spirit of the Kennedy Center’s Betty Siegel

The FCC, HLAA and Technology

Learn what HLAA does on the national level for people with hearing loss.

From the Executive Director’s Desk

The World Report on Disability.