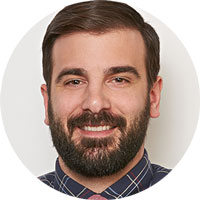 Scott Michael Robertson, Ph.D., is an autistic adult and a senior policy advisor in the Office of Disability Employment Policy in the U.S. Department of Labor (DOL). He spearheads ODEP’s $3.8 million Partnership on Inclusive Apprenticeship (PIA) in his role as the federal project manager. Dr. Robertson also advances work to propel support for neurodiversity in workplaces and improve access to gainful employment and career paths for job seekers on the autism spectrum. He serves as a key subject matter expert for ODEP’s $2.1 million project on Research Support Services for Employment of Young Adults on the Autism Spectrum.

Before joining ODEP, Dr. Robertson served as a Joseph P. Kennedy, Jr. Fellow in the U.S. Senate Committee on Health, Education, Labor and Pensions. He also served as the founding vice president of the Autistic Self Advocacy Network (ASAN), a national nonprofit organization based in Washington, D.C. Dr. Robertson earned his Ph.D. in information sciences and technology at Penn State University. In 2021, DOL awarded him and his colleagues a Secretary of Labor’s Exceptional Achievement Award for work to help foster inclusive apprenticeships. The Viscardi Center in New York awarded him a Henry Viscardi Achievement Award for exemplary global leaders who drive work to empower people with disabilities. He is also an inductee of the national Susan M. Daniels Disability Mentoring Hall of Fame and a recipient of a Jay S. Drotman Award from the American Public Health Association for emerging leaders in health policy and practices.