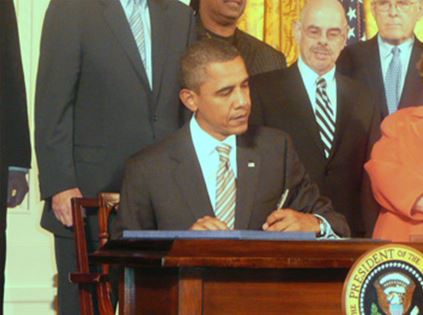 Hearing Loss Association of America literally had a front row seat on October 8, 2010, when President Barack Obama signed the Twenty-first Century Communications and Video Accessibility Act of 2010 (CVAA) into law. It was the cap of HLAA’s hard work with COAT (Coalition of Organizations for Accessible Technology) to move this bill forward. We testified before Congress in favor of CVAA in June, 2010, educated legislators about the need for the legislation and encouraged HLAA Chapters and individuals to join COAT to support these efforts. We got involved because we believe this legislation will help ensure people with hearing loss will have greater access to the internet for years to come. We will stay involved as CVAA is implemented.

According to the FCC, the CVAA was passed by Congress to update our nation’s telecommunications protections for people with disabilities. The CVAA follows a string of laws, passed in the 1980s and 1990s that were designed to ensure that telephone and television services would be accessible to all Americans with disabilities. But these laws were not able to keep up with the fast paced technological changes that our society has witnessed over the past decade. The new law contains groundbreaking protections to enable people with disabilities to access broadband, digital and mobile innovations — the emerging 21st century technologies for which the act is named.

The FCC estimates there are approximately 36 million Americans with hearing loss and 25 million with a significant vision loss. In 2009, a study conducted by the FCC revealed that people with disabilities are less likely to use internet-based communications technologies: 65 percent of Americans have broadband at home, but only 42 percent of Americans with disabilities have these services. This gap is due in part to physical barriers that people with disabilities confront in using the internet. It is for this reason that the National Broadband Plan, adopted by the Commission in March 2010, recommended that Congress and the FCC should modernize accessibility laws to keep pace with broadband technologies.

The CVAA is divided into two broad titles or sections. Title I addresses communications access to make products and services using Broadband fully accessible to people with disabilities. For example, smart phones will be required to be usable by blind and visually impaired people as well as people with hearing aids. Title II of the accessibility act breaks new ground to make it easier for people with disabilities to view video programming on television and the internet. For example, programs shown on television with captioning will be required to include the captioning when they are re-shown on the internet. Both titles include provisions to ensure that people with disabilities have access to emergency information such as the next generation of 911 services and emergency information on the television.

The impact of the internet makes it clear that people with disabilities must not be left behind. FCC Commissioner Jessica Rosenworcel provided remarks on October 29, 2014, on technology accessibility and the World Wide Web. She said, in part:

For me, the history of the Web is one of inclusion. It is one that involves breaking down barriers. After all, it is our global town square. It is our individual soapbox and our shared platform for opportunity. It has forever changed the way we connect, create, entertain, educate, and govern ourselves. Looking forward, I submit that our magna carta should include access for people with disabilities.