Discovery, advocacy and the road to possibility

“If there’s one takeaway I’ve gained from being part of HLAA, it’s advocacy. We need to speak up for ourselves. If you can’t hear in a given situation, let someone know.”

It’s such a seemingly simple concept. But in a fast-paced, hearing world — where time for calm, quiet human interaction is ever-waning — it’s much easier said than done. And now, with the pandemic and masks, the challenge feels even greater. 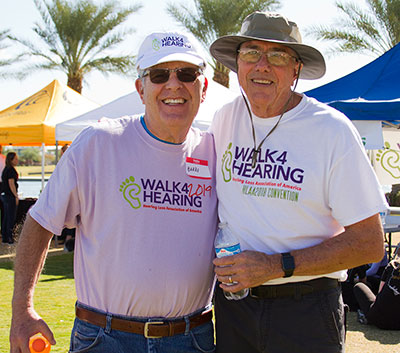 But those are words that long-time HLAA member Ron Tallman lives by. Yet, it wasn’t always that way. And like so many others with acquired hearing loss, the road getting there was long.

Ron was told that he had significant hearing loss in his left ear in 1992 — during his retirement physical after 22 years of service in the military. He’d been drafted at 19 and had chosen to go into the Navy, like his father and two older brothers before him.

For three years, Ron had served on board the USS San Bernardino (LST-1189), homeported out of Naval Base San Diego. One of his assignments was to be the captain’s phone talker. Ron passed information from the captain to gun control during general quarters — the announcement signaling all hands aboard ship go immediately to battle stations. He also was the captain’s phone talker during live fire exercises. The gun mount was only about 20 feet from where he stood. And given the era — 1977 to 1980 — Ron wore no hearing protection. Needless to say, the exercises were extremely loud.

“I remember trying to get some sleep after spending over eight hours on the bridge at general quarters and firing the guns,” Ron remembers. “My ears would throb and ring.”

After leaving the Navy, Ron got hearing aids and wore them for 15 years. They seemed to work well in most situations. But after a while, his hearing took a marked decline.

The first time Ron realized he couldn’t hear or understand speech was about nine years ago: “I’d get up in the morning and go out to the kitchen to make coffee, pick up the paper and turn on my computer. At the time, we had three dogs,” Ron recalls. “One morning I stopped making coffee, turned around to look for the dogs, and there they were. I could see their mouths moving, but I couldn’t hear the bark.”

At about that time — when Ron’s ability to hear was at its lowest point — he communicated with his daughter and son, 34 and 24, using a white board. He and his wife had recently learned American Sign Language (ASL) but were still novices and could only communicate in short sentences. So in many instances, she used a white board too.

“It worked,” says Ron. “But I know it was an inconvenience for them. And this brought on feelings of being forgotten, left out and isolated.”

ASL was his wife’s idea, Ron acknowledges. “My hearing was getting very bad, and we’d talked about my taking early retirement. She said that would be fine — if we enrolled in ASL classes at the local community college.”

Ron had been with Intel Corporation for 15 years. He worked in the fabrication factory where computer chips were manufactured. “I could no longer hear tool or fab alarms,” he says. “And when I could hear them, I couldn’t tell where they were coming from.”

The tool alarm alerted operators when something needed attention. And the fab alarm alerted workers if something had happened in the factory — like a chemical or gas fume leak.

“The alarm would sound and was followed by an announcement indicating the location of the leak,” Ron explains. “I couldn’t understand the alarms — or the announcements.”

So he explored the possibility of another assignment with his manager. But the only opening outside the factory required phone communication — and he couldn’t hear over the phone. So he retired at 62.

Within six months of leaving Intel, Ron knew that hearing aids were no longer effective in helping him understand speech. “I’d see people move their mouths, but as hard as I tried, I couldn’t understand what they were saying.”

It was at this point that Ron and his audiologist discussed the possibility of a cochlear implant (CI). “I knew absolutely nothing about CI’s,” Ron confesses. But once he was approved, the implant company representative put him in touch with someone who was bimodal — one cochlear implant and one hearing aid.

Cochlear Implants gave me my life back — and they give me an avenue to hear and have a conversation with my family. Technology is just fabulous!

“We met, had lunch and talked about CIs,” Ron recollects. “Then she invited me to an HLAA meeting. I didn’t know what HLAA was — or what to expect. But when I got there, I looked around the room and saw about 50 people with hearing loss sitting and conversing. I knew immediately they were all just like me — going through the same kinds of struggles. That was my first introduction to HLAA.”

“That was my real induction into what HLAA can offer,” says Ron. “When I arrived, I didn’t know what CART or an induction loop were. But at the convention, every room I entered was looped, closed captioning was available, and ASL interpreters were signing. Assistive hearing technology was everywhere. It was so accessible, in fact, that by the time I was ready to leave on Sunday, I’d forgotten all about my hearing loss!”

Ron now has had his CIs for 8 years and just got new ones — and they’re completely Bluetooth-compatible.

“I found HLAA at an important point in my life,” says Ron. “And it opened my eyes to all that is possible while living with hearing loss.”

For the past six years, Ron has been chair for the Arizona Walk4Hearing. And this year, he became president of the HLAA Sun Lakes Chapter.

“At the end of the day, it really is all about advocacy,” he says. “For ourselves — and for others.”